We’ve argued, disagreed, scrapped, cried and everything in between coming up with the EPL team of the year. But finally we’ve put our heads together and decisions have been made. Ladies and gentlemen, here it is. The team of the year…

Made 37 starts in the premier league this season, a constant final defence against marauding premier league attacks, he seems to have banished all 1st season fears of his lack of physicality and penalty area management. Some of his saves this season have been ridiculous earning countless points for his, at times struggling Manchester united side. His unorthodox play has proved not only supremely effective but also charming to match his popular off the field presence amongst football hipsters. OW

Already the recipient of a boat load of praise this season, John Terry is one of the few who have earned it throughout the course of the footballing year. Strong, consistent, a leader, an organiser. Every attribute you could want for a centre back. It’s a shame that so many non footballing headlines have tainted his career. Without all the ‘lad’ behaviour and racist allegations Terry could be considered one of the all time English greats. For all his qualities the sense that trouble is not far away never leaves, but in his defence (pun intended) this season it’s only his football that has warranted discussion. And for all the right reasons. With Gerrard, Drogba, and Lampard (again) all bidding farewell to the Premier League, most would have predicted a similar fate for Terry. Fringe appearances and a fading star. Unlike Gerrard, JT didn’t read that script and instead displayed his imperious best and not only cemented his future at the heart of the Chelsea back line, but once again became the best defender in the best defence in the league. RG

The hero of Arsenals season is not a multi million pound glamour signing, as good as they are, but the unassuming Frenchman at the heart of their defence. Notable by his absence during his brief injury spell Koscielny is key not only to Arsenal’s defence, but their success as a team this term. The ramshackle defending and goals against stat without him in the team is glaringly apparent. Orchestrating the defensive shape, adding a resilience, and offering an organiser that Arsenal have been missing in recent years, Koscienlny has blossomed and few would have predicted such an ascent. He’s not the largest or most intimidating central defender but he has more than held his own against many an imposing forward, and few centre backs have been as important to their team this year as Laurent Koscielny. RG

A young man who’s already experienced a Champions league final and a rainy Tuesday night in Oldham, has settled in a stylish Southampton side after his many loan spells. He’s been at home on the south coast and it’s shown in his performances this term. Pacy and direct from the left full back position he’s been as threatening going forward for the saints as he has been reliable in defence. His apprenticeship under Ashley Cole now has come to fruition and it is apparent in his play style. Under Koeman’s guidance one of the best full backs in the league can only get better. RG

The most consistent Premier League defender of the last five years doesn’t immediately strike you as a natural full back. The 6′ 1″ Serb is in perma-beastmode and is just as an intimidating prospect for attackers this season as any other. Chelsea’s full backs this year have been more traditional than the modern over lapping, pacy, attacking breed we’ve come to expect. Instead focusing on a defensive solidity but that isn’t to say Ivanovic can’t play with the ball at his feet. As well as living up to the impeccable defensive standards he’s created for himself, Branislav has also contributed with goals and assists. A desirable combination. Massively underrated in the Premier League hierarchy, Ivanovic would be the first name on my Chelsea team sheet every week. RG

The little magician ( not Paul Daniels ) as he is known has been in fine form this season. There were question marks about how José would fit him into his system but the little man has worked hard and proved his worth. He made 38 starts for Chelsea and scored 14 goals some of them being big game goals too.  He assisted his team 9 times and add his pace, skill and what seems to be great attitude, Chelsea have a world beater on there hands. MS

What a player!!! His season stats are very similar to Hazards, played 35, goals 16 and assists 8, so that shows the level these two are playing at. When Wenger pipped him from under Liverpool’s nose it turned out to be a massive signing. Sánchez has changed the dynamic of the Arsenal side and attracts his team mate into the game and what I like about him the most is he seems very grounded and enjoys just playing football. MS

Chelsea sold him and then José brought him back and that turned out to be a master stroke. There is no one in the league that can do the job he does. He has great energy levels and strong in the air and loves a meaty tackle, he may have picked up 10 yellow cards but that’s part and parcel of the position he plays. As Russ said Chelsea have found the natural replacement for Makélélé. MS

The 28 year old seems to be at the peak of his powers. We all knew he was a class act when at Arsenal and then he became the finished product after his spell in Spain, one thing that he has improved since his return to the Premier league is he has added a bit of steel to his game. 18 assist in 34 games complimented Costa, and proved to be a devastating attacking force. MS

The ‘Hurricane’ has metaphorically taken the league by storm this season, showing you don’t need to be a €40 million striker from some far away land to score 30 goals in English football. Having only been seen in the Europa league wilderness prior to this season and even early parts of the current campaign he has brushed aside more seasoned strikers (the likes of Soldardo and Adebayor) to become the figurehead of the spurs attack. He has the ability to score all sorts of goals with his 6ft2 frame, showing good feet and pace for a big man accompanied by a strong aerial presence. OW

Has had his injury problems this season, but never seems to struggle getting back to fit and firing fitness, finished top goal scorer in the EPL this season with a 26 goal haul in a man city team that has struggled to get going in the second half of the league campaign after being on equal points with Chelsea at the start of the calendar year. He can create a goal out of nothing and is a constant nightmare for defences with his small but athletic physique, clever movement and deadly finishing. OW 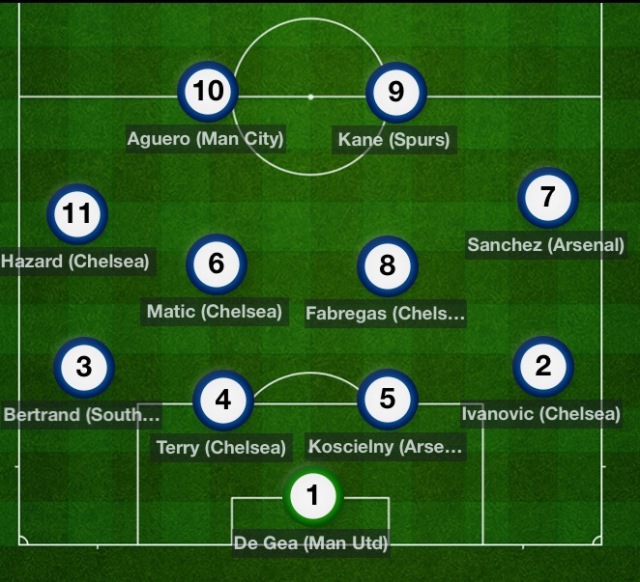 This entry was posted in Opinion. Bookmark the permalink.